Mohegan Gaming & Entertainment unveils the concept behind INSPIRE Athens, a Landmark Integrated Resort and Casino Development for the Hellinikon Project 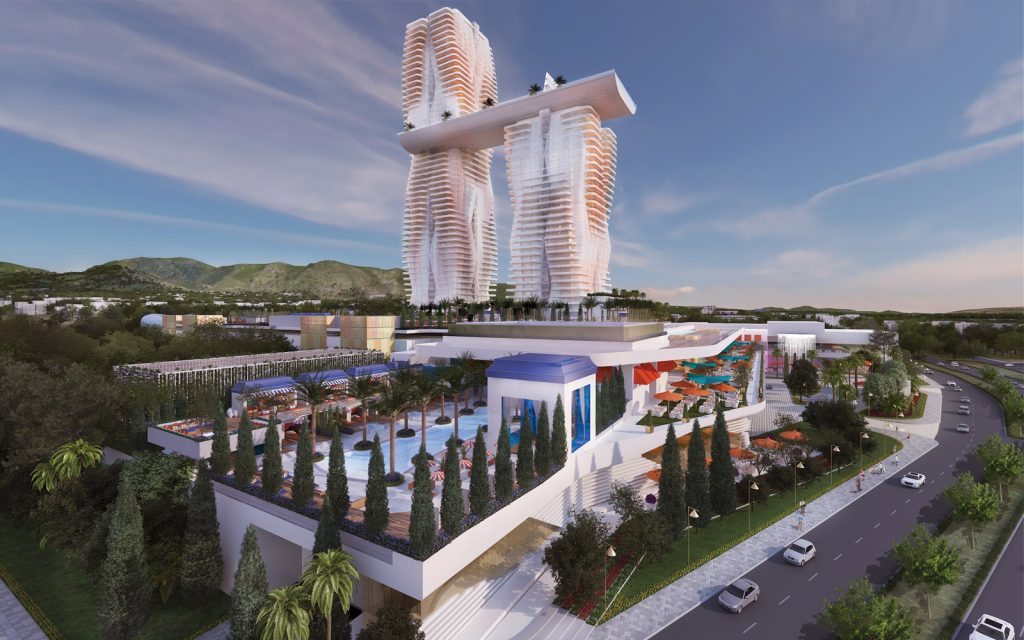 Mohegan Gaming and Entertainment (“MGE”), in partnership with GEK TERNA, unveiled today INSPIRE Athens, its concept for the first Integrated Resort and Casino (“IRC”) in Greece. The resort consists of a luxury hotel, entertainment venues, convention center, shopping, dining, casino, and a comprehensive mix of premium amenities. The development will help launch a new era of tourism growth and economic prosperity for all of Greece and the entire region.

The iconic design of the building was created by Steelman Partners, an international architectural firm specializing in IRC design and development. The concept form draws inspiration from the architectural history of Greece, particularly from Athenian sculptures and buildings including the Acropolis and the Caryatids.

“We understood that INSPIRE Athens was meant to symbolize more than an integrated resort,” said Mario Kontomerkos, Mohegan Gaming and Entertainment’s Chairman and CEO. “It is our hope that INSPIRE Athens would be the catalyst that sparks the entire development of the Hellinikon area into the coveted Athenian Riviera, forever redefining the modern identity of Greece.”

Paul Steelman added, “Our overarching design was meant to be iconic in nature, yet characterize Athens’s historic architecture and rich culture while adopting a new stylistic narrative that inspires the region’s future.”

With state-of-the-art meeting facilities that will reposition Athens as the preferred MICE destination, a multi-purpose indoor event space, and sprawling resort pools, INSPIRE Athens intends to marry world-class luxury hospitality and ceaseless entertainment in a way that’s never before been seen in the south of Europe. Much of the resort was designed to capitalize on the Greek affinity for the outdoors where virtually all the resort’s restaurants, bars, lounges, and nightclubs offer both indoor and outdoor experiences. The collection of food, beverage, and retail outlets includes internationally-recognized brands as well as domestic favorites that accentuate traditional Greek dining, drinking, and shopping. INSPIRE Athens intends to be southern Europe’s center for A-list music concerts, theatrical performances, major sporting events, and other arts and cultural activities on a weekly basis.

Officiating the announcement of the IRC was Mohegan Gaming and Entertainment’s Chairman and CEO, Mario Kontomerkos: “We hope we’ll have the opportunity to turn our vision into a reality and further elevate Greece as a must-visit travel destination with this landmark hospitality destination.” He also mentioned his direct ties to the region as a Greek-American and his ambition for contributing both locally and nationally to the country by aligning with key travel, tourism, and workforce development goals.

The INSPIRE Athens development is estimated to create more than 7,000 jobs in the region during and after construction, including direct, indirect, and induced. The completion of the Integrated Resort and Casino is expected to increase international tourism in the Attica region by at least 10% and contribute millions of euros annually to both the government and the people of Greece in the form of taxes, infrastructure improvement, and public services.

The Hellenic Gaming Commission (“HGC”) posted an official Call for Tender for an “International Tender for the concession of a wide-range activities Casino Operating License in the Hellinikon – Ag. Kosmas Metropolitan Pole” in January, 2019.

On October 4, 2019, the HGC announced the procedure for submission of Tender offers pursuant to Call for Tenders Ref. 1/2019 was complete and the Association Inspire Athens consisting of MGE Hellinikon B.V. – Mohegan Gaming Advisors LLC – GEK TERNA S.A. formally submitted an offer within the deadline.

During an active process of tender submission and consideration, some of the technical components of the development including the details of the proposed hotel, casino, convention facilities, and entertainment facilities are prohibited from being released to the public.

GEK TERNA Group is one of the leading business Groups in Greece with operations also in Central and Southeastern Europe, the USA and the Middle East. The Group’s expertise spans from construction, energy production and supply, concessions, waste management and mining activities to real estate development & management. With a total number of 5,000 employees around the world, the Group has invested more than €2.5 billion in the last years. The current construction backlog of the Group exceeds €1.8 billion, while the total capacity of the energy plants that the Group owns or participates in exceeds 2000 MW. GEK TERNA (www.gekterna.com) is listed in the Athens Stock Exchange (FTSE / Athex Large Cap).

Steelman Partners, based in Las Vegas, Nevada, is an international architectural firm specializing in the multi-disciplinary facets of entertainment architecture, interior design, graphic design, planning, theater design, purchasing, 3D design, and lighting. The company has offices in Santa Monica, Zhuhai, Macau, Manila and Ho Chi Minh City, and a new European location opening in 2011. Established in 1987, Steelman Partners has positioned itself as the premier touchstone in entertainment architecture. The firm is well known within the gaming industry with a client list that includes, MGM, Harrah’s, Wynn, Venetian, Lady Luck, Swiss Casinos, Sheraton, Hyatt, Plaza/El-Ad, Crown SDJM, Melco, Caesars plus many others. The company has grown in size from $155,000 in revenue with 4 employees in 1987, to now $42,000,000 USD in revenue with approximately 200 employees to date.